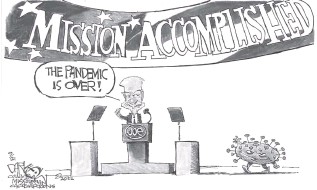 The pomp and circumstance surrounding the passing of Queen Elizabeth II evoked memories of the days of the British Raj. It fell to the queen during her long reign to keep up the appearance of far-flung imperial riches while presiding over the final disintegration of what had once been the world’s most powerful, wealthiest empire. As millions mourn her passing, some asked why in her decades as queen she never apologized for all the evils perpetrated by her royal ancestors, and the admirals, generals and colonial officials who had bullied and exploited millions from Africa to Asia to America. The calls for a royal apology remind one of the persistent demands that Japan apologize for all the wrongs committed by Japanese leaders as they sought to turn Japan into the hub of an empire extending from China through Korea and Southeast Asia, which the Japanese called a “co-prosperity sphere.” Over the years, demands for a Japanese “apology” have never ceased while the Japanese repeatedly express their sorrow for the sins of their forebears. The problem with these demands is that it’s not possible to atone for the horrors of the past. There’s no way to compensate for the tragedies inflicted on nations and people whom the Japanese ruled. Repeated calls for apologies distract from forming close military, diplomatic and commercial relations and also complicate negotiations on tendentious issues. Between Korea and Japan, these issues include wages owed to the thousands of Koreans forced to work as slave labor for huge Japanese manufacturers that should have no problem paying what they owe. Elizabeth does not seem to have considered apologizing for anything. It was enough to know that she was not looking back with nostalgia to the days of British imperialism. For her to go through apologies for whatever the British did in asserting their rule over the Indian subcontinent, the “jewel in the crown” of the British monarch, would have been absurd. Apologies would only rekindle historical complexes, deepening rather than resolving differences. Critics may say Elizabeth needed to say sorry, but the post-colonial rulers of India and other one-time British possessions have never sought expressions of abject regret with the same fervor as that of Koreans demanding apologies from Japan. There is, of course, a huge difference between the role of the British monarch and the Japanese prime minister. The British royalty has little real power. The government is controlled by the prime minister, who must report to the monarch, now King Charles III, on important policy decisions in which the monarch has no role to play. It is a peculiar system in which the monarch is venerated but restricted to an enormously ceremonial role that still inspires loyalty not only to the crown but to the country. In Japan, the emperor was reduced to a ceremonial position after the surrender on Aug. 15, 1945. Emperor Hirohito read the surrender rescript and then appeared on the U.S. battleship Missouri to sign the surrender in the presence of General Douglas McArthur, the American commander who had been leading U.S. forces against the Japanese. Like Elizabeth, Hirohito and his successors have not apologized for the evils of Japanese imperialism. In Japan, it’s the prime minister who’s inevitably hounded by fresh demands for an apology, which Japanese prime ministers have given many times. No matter how they are worded, these apologies are always denounced as “insincere,” and they never resolve a number of issues between Korea and Japan that may simply be irresolvable. South Korea’s president, Yoon Suk-yeol, unlike some of his predecessors, appears seriously interested in improving relations with Japan for the sake of mutual security, and he’s definitely toning down the anti-Japanese sentiments expressed by some of his predecessors, including Moon Jaein, the liberal who some say did much to damage Korean-Japanese relations. It’s significant that Yoon was in London for the funeral ceremony. He no doubt wants to develop strong relations with Britain, and he might also appreciate the example set by Elizabeth before her own people and the rest of the world. The queen’s reign stood for peace and good will, encouraging harmony without stooping to the level of meaningless apologies that would have done nothing to improve or advance relations between Britain and the lands it once conquered and ruled.