At age 50, Yum Jung-ah is still at top of her game 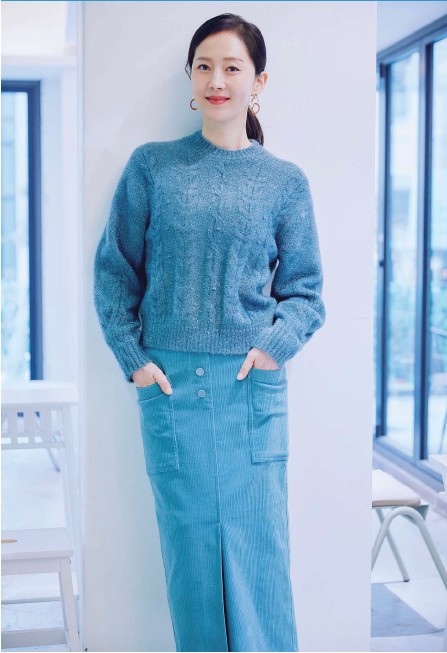 Yum Jung-ah is one of the most accomplished actresses of her generation here who remains at the top of her game, but she still gets nervous before opening a movie. Ahead of the release of her new film, “Life is Beautiful,” Yum made a secret visit to a movie theater in Seoul where she sat with the audience and watched their reactions during the pre-release screening. “I saw the film in theaters four times because I wanted to witness the audience’s reaction. Although I know all the details about the plot, I cry every time I watch it. Last night, the audience members were laughing and crying. One lady in the crowd was wiping back her tears with bare hands so I wanted to hand her a tissue,” she said during an interview with The Korea Times at a cafe in Seoul, Wednesday. Over the course of her three-decade career since entering the entertainment industry in 1991 as a Miss Korea pageant runner-up, Yum has solidified herself as a versatile actor capable of thriving in any genre setting. Yum’s peerless filmography is populated by numerous accolades — highlighted by a Best Supporting Actress award at the Blue Dragon Film Awards for the 2004 film, “The Big Swindle,” Best Actress award at the Baeksang Arts Awards for the 2007 film, “The Old Garden” and the 2014 film, “Cart,” respectively. Nonetheless, at age 50, Yum continually proves to be a multifaceted actor on screen. That’s demonstrated by her bold decision to star in the jukebox musical film, which is a comedy-drama about a middle-aged couple, Se-yeon and Jin-bong, who embark on a journey to find Se-yeon’s first love after she is diagnosed with terminal lung cancer. A huge fan of “La Land” (2016) and “Mamma Mia!” (2008), Yum said she was eager to do a musical film. However, she found it more difficult than she had imagined because her dancing skills fall short of anything great. She started vocal and dance training a year before she actually started filming. “I had to start from the basics — learning abdominal breathing, the beat and rhythm of music. It actually felt like going back to school. I even dreamed about my vocal coach counting ‘one, two, three…’ because I was really anxious,” she said. She recalled that playing the scene of “The Cult of Solo” was the hardest part because it involved many actors. Despite challenges, she was deeply satisfied with having taken the role and expressed her desire to be part of another musical film. “Music is a really good tool to induce certain emotions. It was really helpful when acting. I’d love to do another musical film in the future,” she said. She added that doing action sequences is the most difficult part of being an actor. “Right now, I’m filming the action comedy ‘Cross,’ which requires me to film action scenes. I have bruises all over my body,” she said. Asked why the actress constantly challenges herself, Yum said, “Because I like the script and the character, I have to get in shape for different roles. At first, directors whom I work with have no idea that I’m this bad at doing action scenes because I’m tall and I look fit. When they regret casting me, then it’s too late,” she laughed. Yum recalled that filming “A Tale of Two Sisters” (2003) was the turning point for her acting career. “When I was in my 20s, I wasn’t sure if I’d still be in the business by the time I’m 50. I found pure joy in acting when filming ‘A Tale of Two Sisters.’ That’s when I earned positive reactions from critics and audiences alike,” she said. Early in her career, Yum has portrayed wealthy, bold and unapologetic characters. Since appearing in “Cart,” she has started to take on more approachable characters. “I don’t feel like I need to maintain anything, and that’s why I can do different films and take risks, not knowing how it’s going to end up. In real life, I’m a relatable, ordinary ‘ajumma,’” she said. Now in her 50s, Yum has definitely realized her strengths and weaknesses as an actor. “I have clear diction, but I have no control over my body. I cannot shoot action sequences in long takes,” she said. In the latest film, Se-yeon completes her bucket list before dying. Asked what is on her bucket list, Yum said she wants to travel more often with her family. “By the time I’m 50, I thought I’d have traveled a lot. But my family travels abroad about once a year because it’s really hard to adjust everyone’s schedules,” she said. Yum said she doesn’t ever want to go back to her 20s because too much thinking is exhausting to her. “I’d rather not because I can’t live better than this. I’m still moving forward, so I don’t want to reflect on my life, its highs and lows. I’m happy with where I am,” she said.