Namyang founder ordered to hand over shares to Hahn & Company 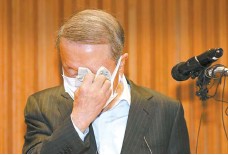 A court has ordered Namyang Dairy founder and his family members to hand over their controlling stake in the dairy company to local private equity firm (PEF) Hahn & Company as they agreed last year. The Seoul Central District Court ruled against Namyang Chairman Hong Won-sik and his family, Thursday, ordering them to honor their stock purchase agreement (SPA) with the PEF, dismissing all their claims. In May of last year, Hong and his family members signed the pact to sell their 53.8-percent stake in the firm for 310.7 billion won ($220.2 million), but four months later, they canceled the deal, arguing that Hahn & Company unjustly interfered in their firm’s management and violated a non-disclosure agreement. The PEF then filed a lawsuit against Hong, asking him to honor the contract. It said that since the agreement was finalized, it has every right to appoint its candidates as the dairy firm’s board members. “The stock trading contract was completed, and the defendant’s insistence on the violation of the Attorneys-at-Law Act, as well as the unjust hiring of the same legal representatives, are not accepted,” the court ruled. Further, it ordered Hong to pay for the legal fees. Hahn & Company welcomed the court’s verdict. “The ruling confirmed the natural principle that contracts should be kept. We thank the court for making a good decision. There have been three provisional dispositions (made against Chairman Hong) and there is no doubt that our claims have been justified. (Once the ruling is confirmed,) we will take over the management rights and move on to normalize Namyang Dairy Products’ business,” a Hahn & Company official said. Meanwhile, Hong expressed “regret” through his law firm, vowing to appeal the ruling immediately.“Our rights were not properly protected in the process of selling the company that inherited the family business. (Hahn & Company) also did not implement the prior agreement made with us. It is regretful that the court did not seem to have fully considered these conditions,” Hong said in a statement.