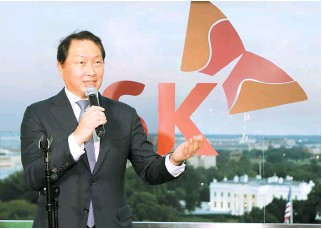 Korean companies should make every effort to find ways to survive in the increasingly uncertain global business environment as the U.S.-China rivalry intensifies, according to SK Group Chairman Chey Tae-won. Chey also told reporters in Washington, D.C., Tuesday (local time), that he maintains a cautious stance on the Inflation Reduction Act (IRA) and the Chips and Science Act passed recently in the U.S. “The world is now decoupling and the risk increases depending on the speed and depth of the decoupling,” the chairman said. “Depending on which areas are emphasized, the risk may be greater or the opportunity may be greater.” He emphasized that it is too early to see if the new U.S. laws will be “advantageous or disadvantageous” at this stage. “It is not known whether the purpose (of reinforcing manufacturing in the U.S.) will be well-achieved (only by enacting the law),” he said, “Operation is a much more important issue than the laws themselves. How to operate and at what speed seem to be the keys.” The chairman stressed that the laws were passed with the consent of the U.S. public and that it is important to understand where they are coming from and cope with the situation. “Regarding public opinion here that Korean companies have been blindsided by the IRA, you can see it that way, but it doesn’t help the situation,” the chairman added. “This is a law passed with the consent of all Americans. It is part of our job to better understand the circumstances that they had faced and to find a solution based on that understanding.” At the meeting, there was a question about whether a contingency plan is being considered to brace for a worsening situation in the future due to the tensions between the U.S. and China, and between China and Taiwan. “Of course, we will review (preparations for a worsening situation in China and Taiwan), including the ‘worst-case scenario’” Chey responded. The chairman explained that he is also benchmarking the strategies of Taiwanese companies which are more directly affected than Korean companies. “Are you going to abandon one of the two markets?” he asked. “If China takes up about 25 percent of our exports, then suddenly abandoning that market is not a viable option. The economy cannot handle it. It is necessary to come up with countermeasures where decoupling occurs. It’s a matter of survival (for companies), and I think cooperation (on the government level) is necessary.”