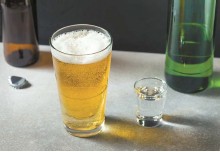 The average adult residing in Korea consumed on average 53 bottles of soju and 83 bottles of beer last year, data showed. That is equal to a bottle of soju and nearly two bottles of beer a week. According to National Tax Service (NTS) data submitted to Rep. Kim Sang-hoon of the ruling People Power Party, 825,848 kiloliters of soju was shipped out from local soju breweries last year. The amount of beer — locally brewed and imported beer combined — totaled 1.79 million kiloliters. That amount may seem huge but it is actually less than what Koreans used to consume before. The amount of soju shipped from local distillers in 2017 totaled 945,860 kiloliters, and the figure last year was 12.7 percent less compared to then. The amount of beer also dropped 16.7 percent from 2017 when 2.15 million kiloliters of beer was consumed. Imports of some liquors also dropped. Whisky Imports dropped 23.9 percent and liqueur dropped by 23.6 percent. Imports of Japanese sake also decreased to half. Imports of wine, however, more than doubled during the same period, from 36,517 kiloliters in 2017 to 76,881 kiloliters last year. “Even before the start of the COVID-19 pandemic, the production and importing of major liquors was decreasing overall. It seems to be due to cultural changes, such as (fewer) company dinners and other group gatherings, as well as shifts in alcohol consumption patterns,” Rep. Kim said. However, he pointed to the diseases and deaths related with alcohol consumption, citing data from the World Health Organization (WHO) which stated that alcohol consumption is a major cause of more than 200 diseases and is estimated to cause 33 million deaths a year. “The government should continue to implement policies to control and prevent excessive alcohol consumption,” the lawmaker said.