UDC 2022 kicks off with fanfare in Busan 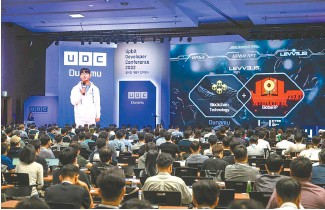 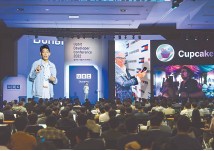 BUSAN — The Upbit Developer Conference (UDC) 2022 started Thursday with great fanfare under the key theme of “Imagine your blockchain life,” bringing together prominent blockchain developers from here and abroad in the nation’s largest port city. Leaders and developers from major blockchain network operators — such as Polygon, Solana, TRON and FTX — have appeared at the event, where they discussed how blockchain will reshape people’s daily lives. The UDC 2022 is expected to grab the attention of more than 3,000 visitors during the two-daylong fair. This marked the first time since 2019 that the event was held offline due to the years-long COVID-19 pandemic. Song Chi-hyung, co-founder and chairman of Dunamu, welcomed the audience with an opening address. Upbit is the nation’s largest crypto exchange and an affiliate of Dunamu. He remained optimistic about the outlook of the crypto and blockchain industry, saying that the ongoing “crypto winter” will eventually be overcome by the continuous development of blockchain products and services. “We need to prove with more advanced blockchain products and services that we can tackle the crypto winter,” Song said during the speech. “The blockchain service environment has drastically improved with the successful upgrade of Ethereum’s Merge, which paved the way for the scalability expansion across the industry.” “The notion of tokens has also expanded into non-fungible tokens (NFT), and a variety of companies in the area of commerce and content are also joining the blockchain project, which was not the case in the early phase when only some financial and fintech firms showed interest.” After his speech, Henry Hecht-Felella, global strategy and operation lead at Polygon, discussed the Layer 2 blockchain. Polygon is a rapidly-growing Layer 2 solution built on Ethereum. He expressed its vision of attracting more than 1 billion users across the globe into the next-generation internet era of Web 3.0, which features a decentralized online world. Tom Lee, leader of the Korean team at Solana Foundation, also shared its future growth strategy focusing on NFTs. He said that the number of users who purchased NFTs from the Solana marketplace reached 21 million as of the end of 2021. “Solana is the world’s second most active NFT player after Ethereum,” Lee said during a speech. Solana is one of the leading Layer 1 blockchain along with Bitcoin and Ethereum. As of Thursday, Solana was the world’s ninth-largest cryptocurrency by market capitalization. Solana also unveiled its partnership with Lambda 256, the blockchain research subsidiary of Dunamu, for its more aggressive expansion into the Korean market. It is one of the most active overseas blockchain players in Korea. Earlier, Solana Ventures set up a fund worth 120 billion won to support companies operating businesses on Web 3.0 here. A series of other blockchain experts — including Lambda 256 CEO Park Jae-hyun and Brian McKenna, head of product at Mina Foundation — also joined the session on the first day and discussed the future of the Layer 2 blockchain and smart contracts. The second day of the event will be centered on NFTs, the metaverse and gaming.